Many of my Eur-Asia family and their friends were professional soldiers with KNIL, KNIL-ML, Navy or drafted in 1941. All became prisoners of war of Japan in early 1942.

In the Dutch East Indies the majority of men between 18 and 50 were mobilized.

About 42,000 of them were taken as a prisoner of war: a.o. Eur-Asian, Javanese, Moluccan, Papua, Timorese, Torodja (Celebes) and Menadonese KNIL soldiers.

Grandma’s brother, 'Robert Bastiaans', was 'transported' to Thailand after his capture and 'employed' on the Burma Railway. He died in Kurikona 258 camp on August 2, 1945, just a few days shy of liberation. He was a 1941 mobilized 'Landstorm Sergeant 1st class of the Military Administration - Unit 2nd Landst. Section Bandoeng.

Most of family members in Japanese labor camps survived the 3.5 year horror as slaves in Japanese POW camps on Java and in Japan. But they became part of the many Dutch State servants who were never paid their 3.5 years salary [1].

In the Dutch East Indies 70,000 KNIL soldiers and 33,000 Indonesians were deployed [2] [3] [4]. The KNIL veterans who returned from POW captivity in Japanese camps were reclassified and seconded to different areas in the archipelago. Between 1945 and 1950 units with KNIL veterans were mixed with troops of Dutch regular army, conscripts and war volunteers [5].

The 70,000 KNIL veterans and 33.000 Indonesians ended up in different units, usually infantry. A small number was KNIL-ML, such as grandfather Bastiaans with 122(NEI)Squadron on Polonia airbase near Medan.

Airbase IIVB Polonia was located on the southern edge of Medan and late 1946 on three sides enclosed by Indonesian Republican territory. The demarkation line ran straight through the city. Often the city and the airport were shot at from the edge of the forest by snipers and bombarded with mortars and machine guns.

"In the beginning there was a lot of shooting and we were not allowed to leave the airfield", my mother said. At the time in her teens and living on the airbase' compound.

These perilous living conditions have undoubtedly had a major impact on their lives. My articles about the Dutch "police actions" and the role of 122(NEI)Squadron in 1947 and 1948, were motivation to look into ground troops on Sumatra, especially those near Medan. 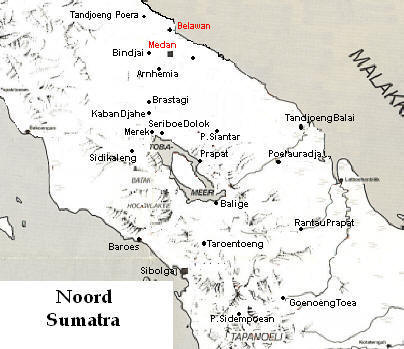 At the time, I had no idea what Z-Brig and 1-1-RI meant or was. And yet, one could say they indirectly impacted my life..

Z - Brigade [b] consisted of 1-1 RI, 3-3 RI, Inf VI, Inf VI, auxiliary weapons of the KNIL and the so-called "Calmeyer" units at Medan in North Sumatra. These were units of cavalry and artillery in support of the Infantry Brigades formed in Malacca. These units also mainly consisted of war volunteers. The commander of the Z - Brigade was also commander of the Territorial Troops Command North Sumatra.

After arriving in North Sumatra, the Z - Brigade took over the positions of the British 26th Indian Division and the 4th Indian Infantry Brigade and was stationed in Medan, the port of Belawan and along the connecting road between the two places.

On January 2, 1947, a large-scale action was launched resulting in occupation of the area south of Medan. Many actions were also taken along the Belawan - Medan road to secure the convoy road. 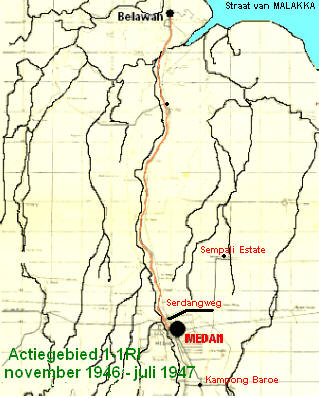 1-1 RI is the OVW battalion 1 -1 Regiment Infanterie, known as` Bataljon Drenthe`, which was established on 4 June 1945 in Zuid-Laren. That place is in the region of my Dutch ancestors. My Eur-Asian grandfather worked for 122(NEI)Sqn and my grandmother + mother and uncle lived in Medan from ~ '48. I found it quite striking.

Indirectly the family has been influenced by the presence and actions of this battalion, as they lived in a secured area on the airports base.

"The OVW battalion` 1-1 RI` originated from the 'Binnenlandse Strijdkrachten van gewest 3, Drenthe'. After training, the battalion was temporarily assigned to the mine clearance service at Bergen op Zoom in the netherlands. The battalion was provided with the necessary equipment in England and left on January 25, 1946 with the "New Amsterdam to the Dutch East Indies." [6]

On November 2, 1946, the battalion was transferred to Medan on North Sumatra. Immediately upon arrival on November 13, 1946, it took over the positions of British Indian troops on Serdangweg in eastern Medan, with daily infiltrations and shelling.

"On January 2, 1947, the battalion took part in an action that moved the posts of the Z-Brigade further south. Multiple actions followed, such as on January 14, 1947, along with Inf.IV.KNIL and 3-3 RI to Sempali Estate which was permanently occupied on March 16, 1947. On February 15, 1947, the TNI attacked the posts at Kota Masoen (brickworks factory) and Kampong Baroe in a large-scale attack. In March, patrol activity was increased due to reports that negotiations with the Republic of Indonesia (Linggadjati) would fail." [6]

The KNIL veterans who returned from captivity were reclassified and seconded to different areas in the archipelago. Among them units with (in)famous nicknames. 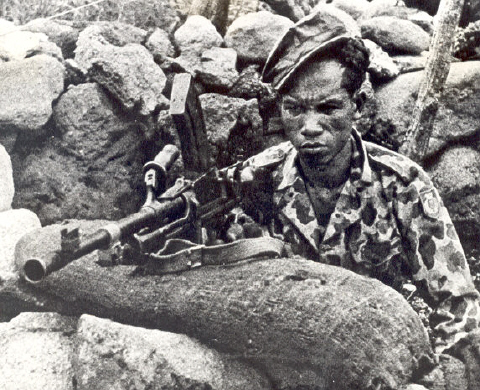 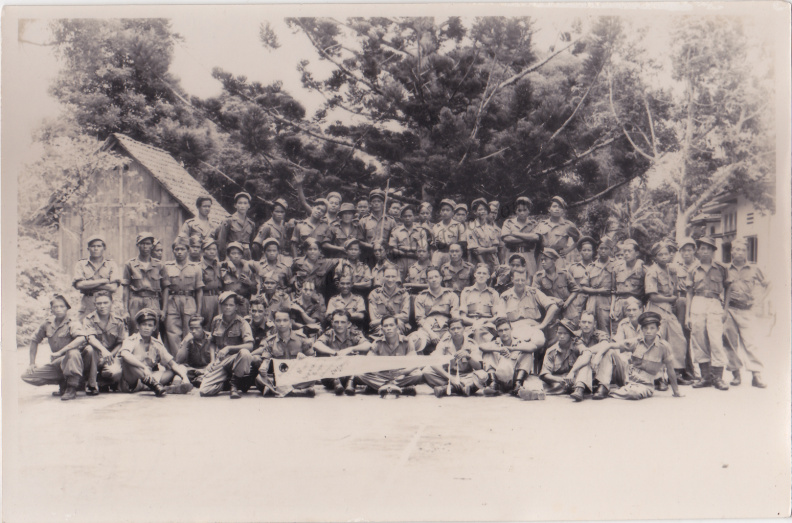 Air Force of the Republic of Indonesia

Recovery of Allied Prisoners of War

1. After the capitulation of Japan on August 15, 1945, they - unaware of the future in which they are cheated by the Dutch state - return to active service of the same netherlands kingdom. Just like ~ 100,000 colleagues.
2. Passie voor onze veteranen? Een onderzoek naar berichtgeving over veteranen in de Nederlandse gedrukte media (Passion for our veterans? An investigation into reporting on veterans in the Dutch print media) - Manouk Goettsch - 2008 - https://thesis.eur.nl/pub/4758/Goettsch%20MASTERTHESIS%20VETERANEN.pdf
3. Belanda Hitam; In 1936, the number of East Indies KNIL soldiers reached 33 thousand people or about 77%. Source: https://translate.google.com/translate?sl=id&tl=nl&u=https%3A%2F%2Fwww.eramuslim.com%2Fsuara-kita%2Fsuara-pembaca%2Fbelanda-hitam.htm
4. KNIL 1936-1942 in figures and images: in 1929 only 20.76% had European status (mainly totoks and Indos); in 1941, when out of necessity, conscription for Indonesians was finally instituted, it must have been even fewer as a percentage. From the outset, the higher framework was predominantly "European", the Indonesians were deployed outside their region of origin; these measures betray the realization that it was not self-evident to fight against your own countrymen, nor to defend the colonizer’s interests at all times, and that simple truth avenged itself when the war was over: many "deserted." http://indisch-anders.nl/het-knil-1936-1942-in-cijfers-en-beeld/
5. ~ 120.000 Veteraneninstituut - Nederlands-Indië https://www.veteraneninstituut.nl/missie/nederlands-indie/
6. Troop overview 1945-1950 http://www.indie-1945-1950.nl/web/zoek/zoek.htm
7. http://www.indie-1945-1950.nl/web/inf1.htm / http://www.hetdepot.com/InfBat1KNIL.html
8. http: //www.indie-1945-1950.nl/web/infII.htm / http://www.hetdepot.com/InfBat2KNIL.html
9. Bataljon Infanterie III KNIL (Inf.III)
10. http: //www.indie-1945-1950.nl/web/InfIV.htm / http://www.hetdepot.com/InfBatIVknil.html
11. Tjihapit Camp - https://www.japanseburgerkampen.nl/TjihapitE.htm / http://www.boudewynvanoort.com/2016/09/tjihapit-2/
12. bron: http://www.indie-1945-1950.nl/web/infv.htm / http://www.hetdepot.com/AndjingNICA.html
13. bron: https://myindoworld.com/westerling-deel-7/
14. bron: https://duizenddagenindie.wordpress.com/2014/08/22/gadja-merah/